Landscaping the back garden is an on-going project.  It is taking significantly longer than I originally anticipated.  I had originally hoped to get the whole project done in a year.  That was eight years ago…

So what did it look like originally. The old deck (which came with the house) had been laid upside down, was very worn out.  It also had a huge hole in it, which was where a tree had once grown through.

The fence was a total ramshackle mess.  It had fallen down completely in some sections and the whole length of the fence on the right hand side was covered in English Ivy and Bamboo.  It took a year to remove and kill the ivy (you need to check with your local council to determine how to dispose of this as it isn’t always accepted in the green bins).  The fence on the left of the house was replaced before I started the blog.

The back garden is my main vegetable garden area.  I couldn’t wait to get started on the veg so I actually planted crops before I finished the design bit.  In fact I still haven’t even come close to finishing the brickwork between the beds.
The area around the shed was a real mess.  There were loads of bricks and  boulders and rubbish around the shed and I removed them all to discover a tidy brick path.  I recycled as much as I could.

I started making real progress in 2012, when the decking and fencing was finished.

2014-2015
I decided that I wanted to change the structure of the garden a little (well a lot).  The new plan is to reset the side garden bed, make it wider and sturdier and put my fruit trees (citrus and peach) and strawberry runners here.  I intend to replace the whole side path with heavy grey pavers and pebbles too.

The top garden section now has larger, steel raised beds rather than small wooden ones. I cleared the whole area, lifted the existing brick paths and pavers and started from scratch.

2018 and onwards
There’s still a tonne of work to do, but it’s functional, and looks lovely (when weeded, watered etc) 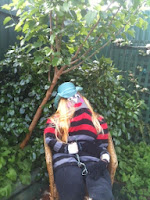 Welcome!I started this blog when I had a mad idea to create a kitchen garden in the backyard jungle. I had no idea about suitability of plants, soil, landscaping or gardening. In the same boat? Need some hints and tips? Come and share my gardening adventure! Sarah

These boots were made for gardening!

Are you looking for a previous post and can’t find it? It may be on the old blog. You can find this blog’s previous life here: Old Blog site